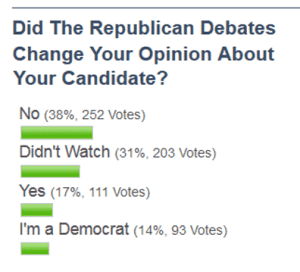 A recent informal myMotherLode poll asked the question “Did The Republican Debates Change Your Opinion About Your Candidate?” The most poplar response was “No” with 38 percent of 659 total votes.

Fox News aired two separate debates on August 6, with less popular candidates going first, followed by a debate between the top ten candidates according to 5 national polls. Both debates aired locally on KVML 1450AM live from the Quicken Loans Arena in Cleveland.

A post-debate CNN poll, which surveyed likely Republican Iowa caucus goers, still showed Trump in the lead with 22 percent of the vote. In second place was retired neurosurgeon Ben Carson with 14 percent. In fifth place was former Hewlett-Packard CEO Carly Fiorina. The poll had a sampling error of plus or minus four points, according to CNN. It was conducted by telephone by ORC International on August 7-11.

Three other new polls this week put Fiorina within the top five of 17 Republican presidential candidates — a huge leap from the No. 14 spot she held prior to the debate.

The next debate on Sept. 16 will be hosted by CNN at the Ronald Reagan Library in California. The candidates will also be separated, with the top 10 getting a spot on the main event stage and the others going to a B-list debate.

The latest Rasmussen Reports national survey finds Trump leading at 17 percent among likely GOP primary voters, down from 26 percent before the debate. Florida Sen. Marco Rubio and former Florida Gov. Jeb Bush are in a second-place tie at 10 percent, with Fiorina and Wisconsin Gov. Scott Walker tied for fourth at 9 percent each.