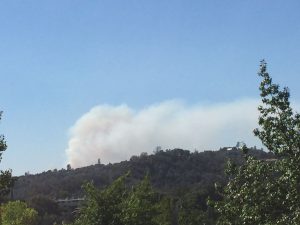 Update at 10:20pm: CAL Fire has better assessed the size of the “Mark Fire” along Marks Ranch Road. Fire officials report that it is 120 acres and 10% contained. No structures are considered in immediate danger. Firefighters will work through the night.

Update at 6:40pm: Firefighters are making progress extinguishing the 35 acre fire along Marks Ranch Road Southwest of Angels Camp. Much of the smoke has started to die down. Some of the initial aircraft that was dispatched has now been released back to base. Firefighters will remain on scene throughout the night working to carve out a strong containment line. There are some homes in the area, but none are considered in danger.

Update at 5:40pm: Cal Fire reports the blaze along Marks Ranch Road has grown to 35 acres. There are some homes in the area, but Spokesperson Lisa Williams reports that none are considered in immediate danger. Firefighters continue to battle the fire from both the air and ground.

Update at 5:10pm: CAL Fire Spokesperson Lisa Williams reports that the two vegetation fires along Marks Ranch Road have now merged into one.  The fire southwest of Angels Camp has grown to 30 acres, and resources are continuing to arrive on scene. No structures are considered in immediate danger at this time. On scene are four engines, a dozer, a helicopter, an air tanker and air attack.

The CHP reports that a vehicle was spotted driving across a field along Marks Ranch Road, and it is believed to have sparked the fires. The Sheriff’s Office is involved with the investigation. No further information is immediately available.

They are in the same area, along Marks Ranch Road. The combined acreage is estimated to be 3-5 acres. No structures are considered threatened but there are some power lines in that area.