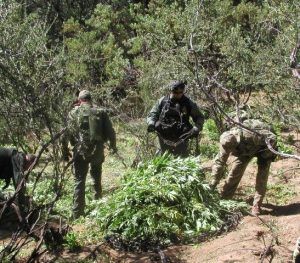 Wilsyville, CA — Michelle Gregory, spokesperson for the California Department of Justice, confirms that there was a marijuana grow bust in Calaveras yesterday.

Gregory says, “We had our mountain and valley marijuana investigation team assisting the camp team and the Calaveras County sheriff’s department. They served a search warrant in a location adjacent to BLM [Bureau of Land Management] land.” They seized 12,000 plants from the rural area and found five sleeping bags. No one was found at the site, so no arrests were made. No weapons were found at the site.

Gregory noted it is about half way through the marijuana grow season but she did not have detailed information about the size or type of plants that were removed, nor their potential value. She could not confirm various reports that Clarke Broadcasting received from local residents that Bald Mountain Heliport near Wilseyville was used to transport officers who rappelled down to the remote location.