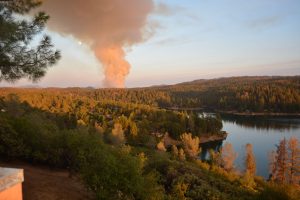 Groveland, CA — Cal Fire has officially called the Big Creek Fire near Groveland, which was started by an escaped debris burn, 100% contained at 204 acres.

Cal Fire Dispatch reports crews will continue to patrol the area checking for hot spots, work on rehabilitating burn areas and mop up overnight. The flames broke out on Wednesday, July 29, off Highway 120, forcing voluntary evacuations of the Hell’s Hollow area. At the height of the fire, resources included 585 firefighters, 42 engines, 5 bulldozers,  7 water tenders and 17 fire crews.

Arrested and charged with recklessly starting the blaze is 43-year-old Lisa Ann Vilmur of the Groveland area. She remains in the Tuolumne County Jail on $100,000 bail.

Meanwhile, the massive Rocky Fire in Lake County near Clear Lake has grown in both acreage and containment. It is 67,000 acres and 20% contained. Several mandatory evacuations remain in effect. The flames have already, destroyed 24 homes and 26 outbuildings, while nearly 7000 structures are still threatened.