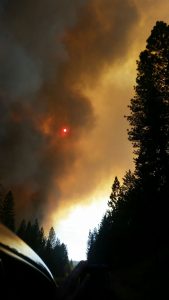 Update on 7-30-15 at 5:45am: Highway 120 is back open this morning after being closed for an extended period last night due to the Big Creek Fire. CAL Fire is planning to release a revised size estimate later this morning, but the latest is 150 acres and five percent contained. 25 homes remain under a voluntary evacuation along Hell’s Hollow Drive, Bucktail Drive, Elmore Drive and Sprague Drive East. The evacuation center remains open at the Groveland Community Hall. Air and ground resources will again attack the fire throughout today. We’ll keep you updated as more information comes into the news center.

Update on 7-29-15 at 9:25pm: CAL Fire spokesperson Lisa Williams reports air resources have returned to base for the evening. The Big Creek Fire remains at 150 acres, and there is no containment. Firefighters will remain on scene throughout the evening working to extinguish the blaze. Tuolumne County Sheriff’s Office spokesperson Sgt. Scott Johnson reports that 25 homes were voluntarily evacuated in the area of Hell’s Hollow Drive, Bucktail Drive, Elmore Drive and Sprague Drive East.  An evacuation center is open at the Groveland Community Hall.

Unless something significant happens overnight, fire and emergency officials are not expecting to have any additional updates until the morning, as the fire typically dies down during the evening hours. We’ll pass along the latest information when it becomes available.

Update on 7-29-15 at 8pm: CAL Fire spokesperson Lisa Williams reports that the Big Creek Fire is up to 150 acres. Highway 120 remains closed from Sprague Road to Hell’s Hollow Drive. Some spot fires have been reported in the area.

Update on 7-29-15 at 7:20pm: CAL Fire reports that an evacuation center will open at 8pm at the Groveland Community Hall at 18720 Highway 120. Spokesperson Lisa Williams says the latest size estimate remains 10-15 acres. There is no immediate word on how many homes are threatened. Highway 120 remains closed from Sprague Road to Hell’s Hollow Road.

Also of note, there is a 1/4 acre fire reported in the area of Peaceful Oak Road in East Sonora that firefighters are extinguishing. The forward rate of spread has been stopped. One firefighter has reported injuries, but no further information is immediately available.

Update on 7-29-15 at 6:10pm: CAL Fire spokesperson Lisa Williams reports that the fire is now estimated to be 10-15 acres. CAL Fire is still requesting that residents evacuate in the area of Hells Hollow Road. Highway 120 is closed between Sprague Road to Hell’s Hollow Road. 16 engines are on scene, three dozers, three hand crews, air attack, two tankers, three helicopters and seven water tenders. There are 121 firefighters assigned to the incident.

Update on 7-29-15 at 5:20 pm: Cal Fire reports the fire has grown to 10 acres in heavy timber. It is on the South side of Highway 120 heading towards the Hell’s Hollow community. Cal Fire is requesting an evacuation of Hell’s Hollow Road.

Original Post on 7-29-15 at 5:10 pm: Firefighters and Columbia Air-Attack are battling a vegetation fire in Groveland area. California Highway Patrol has requested a full road closure of a section of Highway 120. The initial Cal Fire report is it is a one-to-two acre fire in timber and vegetation. Cal Fire spokesperson Lisa Willams says they are making access off of Sprague Road east. Columbia Air Attack is out in full force as well as ground crews, no structures are threatened.

Cal Fire reports the fire is burning at a moderate rate of spread. The fire has been titled the Big Creek Fire by Cal Fire.