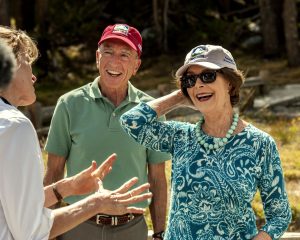 A rededication ceremony for the popular road was held exactly 100 years after the original dedication. On hand for the re-enactment was Laura Bush, who is an honorary co-chair for the National Park Service Centennial. The event included a rechristening of the road, ceremonial ribbon cutting, and a celebration of the history and philanthropy in Yosemite National Park. Other dignitaries taking part included Yosemite National Park Superintendent Don Neubacher and Yosemite Conservancy Vice President Jerry Edelbrock.

In a statement released through Yosemite, Bush said, “I’ve loved our parks for many years and hiked in parks all over the country accompanied by my friends. I urge all Americans to think about parks in the upcoming year and find their park. I found Yosemite.”

During the event, Bush noted, somewhat jokingly, that she previously lived in a National Park, in reference to the White House. Husband, and former President, George W. Bush was not in attendance at yesterday’s event.

The Tioga Road spans 46 miles through Yosemite National Park and is the highest road crossing the Sierra at an elevation of 9,945 feet above sea level.