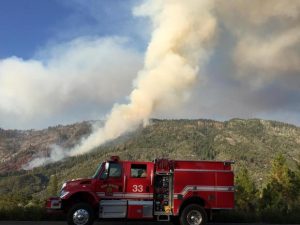 Oakhurst, CA — Firefighters have gained 30% containment on the Willow Fire in Madera County, which has burned 2,077 acres.

An evacuation center remains open at the Oakhurst Community Center for residents impacted near the community of Central Camp. 1,487 firefighters are on scene this morning. Yesterday officials announced that the fire was started by a male juvenile that allegedly lit some small tree branches with a lighter. Officials have not released any additional information about the boy, as he is a minor.

The incident command team reports that they are preparing for the possibility of dry thunderstorms in the area on Thursday, and then turning wet by Friday and Saturday. The triple digit temperatures are also a concern.

Drift smoke from the fire has been prevalent at times in the Mother Lode.