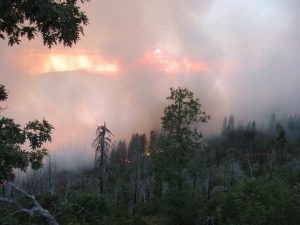 Madera County, CA — Drift smoke is prevalent in many areas of the Mother Lode this morning, as a fire is burning down in Madera County.

The Willow Fire is 1,739 acres and is 5% contained. It is burning in steep and rugged terrain, requiring hand crews to walk in and receive support from helicopters and air tankers. 1,215 firefighters are on scene.

The community of Central Camp is threatened, so an evacuation center is open is at the Oakhurst Community Center.  A larger Type 2 incident command team took over operations last night, which will allow for increased resources. Willow Fire spokesperson Cody Norris notes that the high temperatures have been a major challenge. There was one heat related injury yesterday, and higher temperatures are expected later this week. The cause of the fire, which ignited this past Saturday, is under investigation.