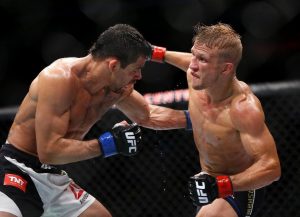 At a press conference afterwards, Dillashaw said, “He brought it in the first round. He set the pace fast early, and I almost went a little too fast because of it. I should have been a little bit more controlled, but it was a fun fight.”

It was a rematch of the May of 2014 fight in which Dillashaw upset Barao to first become the bantamweight world champion. The Bret Harte High School graduate soon became the toast of Angels Camp, and the Mayor declared “T.J. Dillashaw Day” a couple of months later during special homecoming celebration.

Saturday’s fight was held in Chicago.