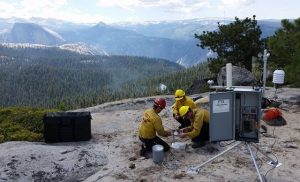 “It’s odd that now we’re literally wetter than we’ve ever been,” said Yosemite Fire and Fuels Department Chief Taro Pusina. “We took anywhere from 1 to 2 inches of rain across the whole park.”

Much of the rain that came from the thunderstorm that swept across the mountains this week was above 4,000 to 5,000 feet in elevation. Pusina comments it has been a rollercoaster ride, explaining, “What that has essentially done is put us in the lowest fire danger that we’ve been in at this time of year for the last 20 years. So, we have very low fire danger right now compared to June or even January this year, for that matter, when we were setting records for being the driest we’ve ever been.”

There have been 12 confirmed lightning fires ignited by the storms. Most are small; single tree strikes that amount to less than a tenth of an acre, according to park fire officials, who say Yosemite and Point Reyes fire crews hiking or flying overhead are monitoring the fires. Pusina adds all the fires have a “low growth potential” with the biggest blaze titled the “Indian Canyon Fire” at 3.8 acres burning in Mariposa.

While the wet weather has been a bit of a reprieve for the higher elevations, expected warmer weather moving into the area over the next 10 days will bring temperatures back to normal, according to Pusina, who warns that the fire danger is still very high; just in time for the park’s 6-week “peak” season (August 1 – September 15).

Here is Yosemite’s list of the 12 fires currently burning in the park: