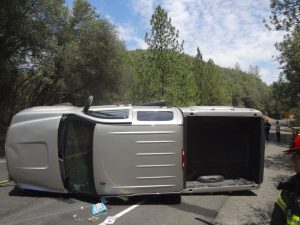 Sonora, CA — The Sonora Police Department has released new information about a crash yesterday morning on Stockton Road that blocked traffic for an hour-and-a-half.

It happened shortly before noon, just east of Mill Villa Court. The Police Department reports that 33-year-old Jerrod Leonhardt of Fremont had reached down to pick up his cell phone, and his vehicle drifted off the side of the road. The GMC pickup truck went up a rock embankment and overturned. Leonhardt suffered minor injuries as a result of the crash. Officers later detected that Leonhardt had been driving under the influence, and he was subsequently booked into Tuolumne County Jail. No other vehicles were involved in the incident.