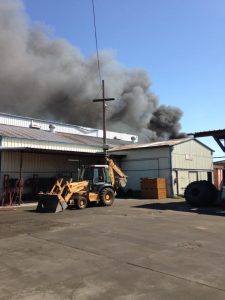 Update July 13 at 12:40pm: The Sierra Pacific Industries Chinese Camp mill will halt its operations for several days. Upon assessing the damage, SPI spokesperson Mark Luster reports that the company needs to order many parts, which will take a couple of days to arrive on site. At this point, Luster says there is not a hard date for the when the operations will be restarted, but notes that maintenance crews are working diligently.

Update July 13 at 8:40am: CAL Fire reports that a cutting torch is what ignited Saturday afternoon’s fire at the Sierra Pacific Industries Chinese Camp Mill. The fire did an estimated $50,000 worth of damage. CAL Fire reports that there was damage to a log debarker machine, a millwright building, and a break room.

Update July 12 at 7:30pm: Sierra Pacific Industries spokesperson Mark Luster reports that crews have already started making repairs to the areas damaged by Saturday’s fire at the Chinese Camp Mill. The company does not anticipate loosing any time, or requiring any type of temporary closure. The exact cause of the fire is still being investigated. More information is expected to be known early this week.

Update July 11th at 6:05 pm.: Cal Fire dispatch reports crews are getting the fire knocked down at the Sierra Pacific Industries Chinese Camp mill, but say spotting into sawdust piles is hampering their efforts and keeping it from being called contained. Crews will be on scene through the evening.

Update July 11th at 5 p.m.: Cal Fire dispatch reports crews are getting a handle on the flames at the Sierra Pacific Industries Chinese Camp mill, but there is no containment at this time. Some of the initial air resources have been called off and have returned to base.

Original Post July 11th at 4:31 p.m.: Chinese Camp, CA — Firefighters are on the scene of a structure fire in Chinese Camp at the Sierra Pacific Industries Mill. Cal Fire dispatch reports the flames broke out just before 4 p.m. on processing equipment outside of one of the SPI buildings and then the flames spread inside that building. The yard at the mill is threatened, according to Cal Fire, but no one has been injured. Columbia Air-Attack is on scene along with 50 firefighters. Other resources include 13 engines, one ladder truck, four water tenders, and one dozer.

A special thanks to community news partner Rose Hunter for the photos. Pictures can be sent to news@clarkebroadcasting.com.