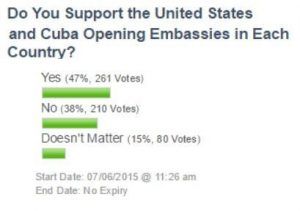 A recent myMotherLode informal poll asked “Do You Support the United States and Cuba Opening Embassies in Each Country?” The results were 47 percent of 551 votes for opening an embassy. On July first the United States and Cuba agreed to open embassies in their capital cities, a major step in restoring ties after more than 50 years of hostilities. The Associated Press reports, “U.S. Interests Section Chief Jeffrey DeLaurentis, a op diplomat, delivered a letter from the White House to Cuba about restoring embassies in the countries’ respective capitals.”

Photographers and video journalists were allowed to document the encounter, but neither he nor Cuban officials spoke publicly.

Other recent myMotherLode polls were health related, 75% voted Yes in the informal poll “Do you think it is important to manage your own healthcare records?” Also, the response to “Has your family experienced any form of cancer?” was 74% Yes, 14% several kinds and 12% No.

An even more recent informal poll asked, “Do you track your health with a fitness app on your smart phone?”  52% said No, 33% don’t have a smart phone 11% do track it and 4% voted for “track with another device.”