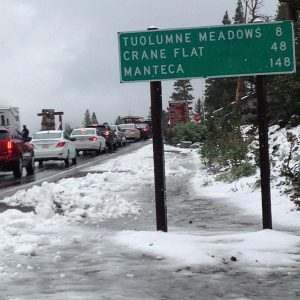 Update 3:30 p.m.: Three lightning-caused fires on the Stanislaus National Forest have been contained, according to Forest officials. Two, both under two acres, were in the in the Groveland Ranger District; the third was in the Me-Wok Ranger District. A single tree was struck near Lyons Reservoir but the flames did not spread to nearby vegetation. Forest Service spokesperson Veronica Lopez says, “Fire crews are monitoring the area in case of additional strikes or hot spots.”

Update 12:30 p.m.: Caltrans reports that some of the Sierra Nevada mountain passes are receiving some July snowfall.

Original Story Posted At 11:45am: Tuolumne County, CA — There are three lightning-caused fires that Stanislaus National Forest firefighters are on scene of this morning.

In the Groveland Ranger District, 1/10 of an acre has burned in the area of Harden Flat and two acres near Montgomery Ridge. In the Me-Wok Ranger District, a single tree has caught on fire near Lyons Reservoir. None of the fires are threatening any structures.

Veronica Lopez of the Forest Service notes that a reconnaissance flight is planned for later today to search for any additional lighting-related fires. A storm system has been making its way through the Sierra Nevada, resulting in precipitation in parts of the high country, and unseasonably cooler temperatures.