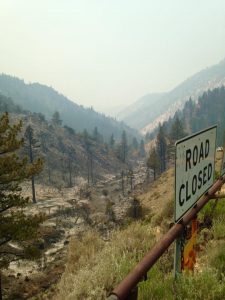 Alpine County, CA — Heavy rain yesterday put a major dent in the Washington Fire in Alpine County, and it even caused mud and rock slides.

The incident command reports that 1.7 inches of rain fell during the period of an hour, and it caused a short-term closure of Highway 4 Ebbetts Pass and Highway 89 Monitor Pass. Caltrans was able to quickly remove the mud and boulders that slid across the highways, as both are back open today. The heavy rain has reduced the fire activity significantly, and there is now just minor creeping and smoldering.

The fire is estimated to be 17,790 acres. There are 667 firefighters are on scene. Two firefighter injuries have been reported. The cost to fight the fire is up to $11-million. This weekend the Type 2 incident management structure will transition to a smaller Type 3 team.

The fire is estimated to be 77% contained.