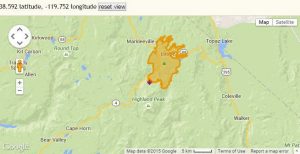 Alpine County, CA — Firefighters have gained another ten percent towards containment of the Washington Fire over the past 24 hours.

According to fire officials, favorable weather conditions and focused attention making line construction and mop up inroads have resulted in a 66 percent containment of the 17,790-acre fire area, located three miles south of Markleeville on Highways 4 and 89.

Today, as the fire continues to smolder, creeping in some areas with some single-tree torching, the spread rate along most of the perimeter is expected to be very low.

While mop up with hose lays along the western and eastern perimeters continues, rehabilitation of the suppression efforts has also been initiated. North and south section crews are hitting the remaining steep and rugged area hot spots. Helicopters are supporting efforts towards securing the fireline. Overall personnel on the scene is currently listed at 764. All structural fire engines in the Markleeville area have been released back to their fire stations.

As progress continues, a transfer of command from Great Basin IMT-4 to a Type-3 organization is tentatively scheduled for Sunday. Fire officials currently estimate a containment date of Friday, July 31. The fire, sparked by a lightning strike, has been burning since around 7 p.m. Friday, June 19.

State Highway 4 over Ebbetts Pass opened Sunday; State Highway 89, east over Monitor Pass to Highway 395 opened Monday. Motorists should use caution driving in these areas as fire personnel is still working along both highways. Secondary roads off these state highways still remain closed and are not accessible to the general public. Law enforcement officials continue to patrol the areas under the Forest Closure Order.

The Indian Creek Campground closure has been lifted. Still closed, along with the burn area are the roads and motorized trails in adjacent areas on the Carson Ranger District. These include Poor Boy; Centerville Flat; Wolf Creek; portions of Monitor Pass; areas around Leviathan Mine; Loop Canyon Road; and the Barney Riley.