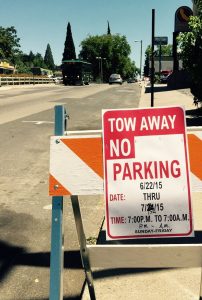 Sonora, CA — Numerous “no parking” signs and a formidable parked army of construction equipment on South Washington Street near Highway 108 during the daylight hours give way to bustling overnight crews as a downtown paving project gets underway this week.

According to city project engineer Jerry Fuccillo, the contractor, George Reed Company, so far has the job very well organized. Hardly anyone noticed, as Fuccillo notes, but crews were working last night from around 7 p.m. until about 5 this morning. Although the construction notices indicate that work zones are running from 7 p.m. until 7 a.m., nightly set-up often takes about an hour to an hour-and-a-half, he says, and crews may sometimes pick up well before 7.

“What happened last night is they did all the contour grinding of Washington Street…all the edge grinding. Tonight, there’re going to be doing the main grinding of Washington Street between Church and Lytton Street,” Fuccillo explains. Now, he cautions, “This may take a little bit longer tonight, as they’re also going to be starting on the traffic detector loops at the signal system, so it might be a little bit more disturbance tonight than last night.”

Although some of the signing indicates that work will complete by July 24, tentative plans are for the paving to be finished by July 17. Crews are scheduled to work nightly Sunday evenings through Saturday mornings. Grinding and other preparation steps are expected to be completed this week, followed by most of the paving and temporary road striping next week. According to Fuccillo, these will probably be the most impactful times for motorists, who should plan to use alternate routes during scheduled roadwork times. The second two weeks will be focused on finishing work and final striping.