Update On Fires In Yosemite 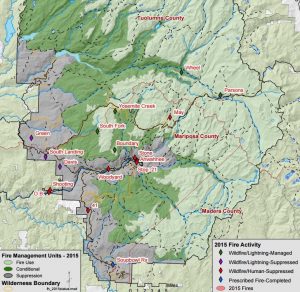 Yosemite, CA – Yosemite fire official have released the latest details on blazes that remain burning and those already snuffed out by firefighters in the park.

Most of the fires were sparked by lightening from the recent thunderstorms over the Sierra Nevada Mountains and Yosemite since early June. However, rain and snow from earlier this week helped put out much of the flames, according to fire officials who say, with the national weather service predicting continued thunderstorm activity through the weekend at the Sierra Crest, all of the fires are currently being monitored by park firefighters.

Here is Yosemite’s list of all the blazes in the park:

South Fork (37 47.965 x 119 40.5028, – Mariposa Co., 8,100’, June 6). This fire is approximately one half mile from Cascade Creek. A single red fir tree was struck but in an area of huckleberry brush and needle litter. This fire is on a northeast aspect and has low to moderate potential for growth. This fire has been visible occasionally from Crane Flat Helibase.

Yosemite Creek (37 50.310 x 119 21.813 – Mariposa Co., 8,020’, June 7). This fire is near the footprint of the 2014 lightning caused Dark Hole Fire and Yosemite Campground Road. The fire is in red fir and huckleberry brush. It is surrounded by broken granite. Observed fire activity is low and smoldering in one down log.

Wheel (37 55.430 x 119 27.873 – Tuolumne Co., 7,412’, June 8). This fire is near Glen Aulin High Sierra Camp and Waterwheel Falls. It is in a red fire, lodge pole and Jeffrey pine forest. It is on the south side of the Tuolumne River. Brush and ground forest litter was observed to be smoldering. It has low potential for growth.

Recent lightning caused fires that are out:

Smoke from these fires may be visible from many locations within the park. Thunderstorm activity is predicted through the coming week and other fires may occur or be found.

Park officials want to remind all visitors to use established campgrounds for fires and make sure the flames are completely out when you leave a campsite.