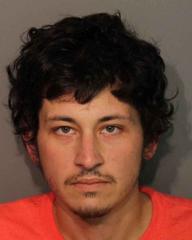 Angels Camp, CA – Angels Camp Police have released new information regarding the carjacking and the booking photo of the Lodi man arrested for a carjacking.

25-year-old Andrew Taormina’s picture can be seen in the upper left hand box. As earlier reported, officers found an injured man lying on the ground around 1:40 p.m., Tuesday, on the 200 block of South Main Street in the Angels Camp Town Center parking lot.  The victim told police Taormina carjacked his 2014 Toyota Sienna mini-van and tried to run him over while fleeing the scene heading towards San Andreas.  Once on Highway 49, a Calaveras County Sheriff’s deputy spotted the vehicle in San Andreas and tried to pull Taormina over using his patrol car’s flashing lights and siren.  Angels Camp Police reported Taormina led the deputy on a chase at speeds reaching nearly 100 mph while heading westbound on Highway 12 towards Wallace. The chase ended when he lost control of the car, went off the highway and flipped over.

Taormina suffered minor injuries in the wreck. He faces several felony charges including carjacking and assault with a deadly weapon.