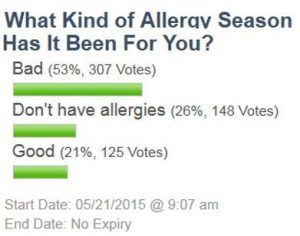 With a winter that got less snow than the spring, an informal myMotherLode poll question asked “What kind of allergy season has it been for you?” The majority, 53 percent said bad with 26 percent “don’t have allergies” and 21 percent said it was a good allergy season for them.

According to the American College of Allergy, Asthma & Immunology, allergic rhinitis, often called hay fever, is estimated to affect approximately 50 million people in the United States. They say the number is growing, and affects as many as 30 percent of adults and up to 40 percent of children.

The spring allergy season can start as early as February with trees shedding pollen, as the ice and snow melt, followed by later by ragweed and grass pollen. Due to severe weather conditions in the Northeast United States the snow kept trees from pollinating until very late in the season. In mid May the New York allergy experts warned of a ‘Pollen Tsunami.’

Currently the forecast for the Mother Lode region is Moderate for tree pollen and low for other types of allergens. Various allergy medication companies have created applications (apps) for mobile phones that track pollen counts. Information from Sonora Regional Medical Center on Asthma and Allergies is in our health section.