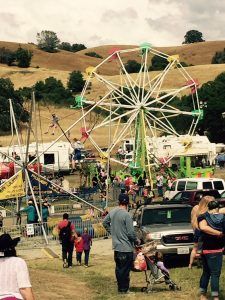 Angels Camp, CA — Although last Thursday’s wet start threatened to put a damper on attendance numbers, fair officials say they are pleased with the turn out at this year’s Calaveras County Fair and Jumping Frog Jubilee.

“Although attendance was slightly down, we had over 33,000 [fair goers],” reports Fair Manager Laurie Gianni. She says that last Thursday afternoon’s weather conditions are directly responsible for the dip. “We had a rain out — it was pouring down rain. We never closed but it did affect our attendance.” However, the good news, she shares, “Saturday [attendance] was somewhere around 11,000, and our Sunday was around 10,000. So, Saturday was pretty much a record for us, which was very exciting, and Sunday was great, too.”

This year’s auction results came in somewhere around $415,000, according to Gianni. “That’s a significant increase over last year’s. So, that’s very exciting — and our young agriculturalists did an awesome job with their projects.”

Gianni admits that due to Saturday’s record crowd, some fair goers experienced longer than usual lines to get in. With relief she notes, “But we were out greeting those folks, and everybody was so pleasant, and so happy to be here.” Over 100 veterans participated in a veterans’ tribute before the rodeo on Saturday night that included a gigantic flag presentation and plane fly over. “[It] was very moving,” she states. “I don’t think there was a dry eye on the hillside — and we had veterans from World War II through the current conflicts.”

Asked if this year’s fair theme, “Jumping Frogs…Chubby Hogs…and Corn Dogs” contributed to corn dog sales, Gianni laughs, replying that, while she does not keep vendor stats, “I do know that some of my vendors on Saturday hit their all time highs!”