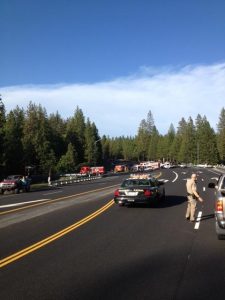 Twain Harte, CA — The CHP reports that three people were flown to hospitals in Modesto following a crash on Highway 108 near the upper Twain Harte entrance.

Two vehicles were involved in the incident, which happened at around 5:40pm last night. The CHP has not yet released the names of those injured. Traffic was impacted for an extended period while emergency crews assisted the victims and cleaned up the debris. We’ll pass along more information when it becomes available.