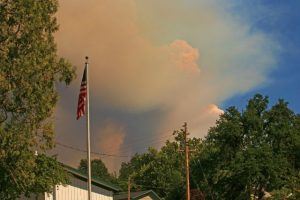 As previously reported, Emerald was accused of accidentally starting the fire in August 2013 while bow hunting. Prosecutors claim that the two witnesses, expected to provide testimony at the trial, recently died. One witness died in a workplace accident in February, and the other, a helicopter pilot, of cardiac arrest in March. Supervisor Royce’s District covers areas hit hard by the Rim Fire including Tuolumne City, Ponderosa Hills, Twain Harte and Mi Wuk. When asked if he thought federal prosecutors botched the job, Royce replied, “It was very suspicious how everything was put together. It took a tremendous amount of time for them to release information and to file charges and now this happens. It adds suspicions.”

With a trial, Royce says, he was hoping it would help “regain the trust of the community because people want to know what happened”. He adds, “The bigger picture is larger than just the justice of one guy…It’s that we learn why 400 square mile of forest burned in Tuolumne County and it goes back decades to the management of our forest and our public lands.”