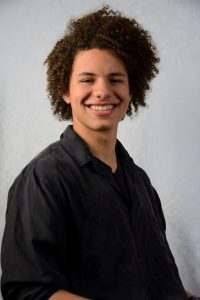 Update 7 p.m.: Sonora High School Sophomore Levi Lowe shined with two readings at the national Poetry-Out-Loud competition in Washington, DC. Wednesday. Lowe was one of nine finalists that competed for the first place title. In the end the judges gave the victory and $20,000 to Maeva Ordaz, from Anchorage, Alaska. In second place was Paris J. Stroud Dallas, GA taking home $10,000 and third was Casey Goggin Pinehurst, NC receiving $5,000. Lowe read Walt Whitman’s poem “The Wounded” in round one of the competition and Philip Levine’s “They Feed They Lion” in the second round.

Update 5 p.m.: Sonora High’s Levi Lowe just wrapped up his first round performance at the national Poetry-Out-Loud competition in Washington, DC.  He read Walt Whitman’s poem “The Wounded”.  The second round of competition is set to begin with the nine finalist from across the country. The event is being streamed live on the internet. Click here to find the link. Lowe will be the fifth person in the second round to compete.

53-students qualified for the event, and they were divided into three divisions based on geographic location.

The top three from each division advanced to the next round. Other finalists are from Alaska, Texas, Indiana, Georgia, Wisconsin, Ohio, Connecticut and North Carolina. Lowe will compete later today in the second round starting at four o’clock pacific time. A viewing party will run from 4-7pm, at Sonora High School, with the doors opening at 3:45. The community is invited to attend.

Lowe will be performing the same two poems from yesterday’s first round, including work from Walt Whitman and Philip Levine. In the event that there is a statistical tie, creating the need for a third round, Lowe will perform a poem written by California’s own Al Young. It would be unique in that Young is a long-time friend of Lowe’s Poetry Out Loud Coach Rick Foster. Joining Lowe in Washington, DC is Foster, local poetry out loud coordinator Bonnie Bryson and Lowe’s mother, and two grandmothers. Funding to help cover travel expenses came from a recent fundraiser put on by the Tuolumne County Arts Alliance.

Also of note, the event will be streamed live on the internet. Click here to find the link. Lowe will be the fifth person in the competition to perform poetry.