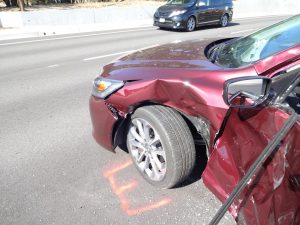 Sonora, CA — The Police Department has released new information about a Monday afternoon accident involving a car and a motorcycle.

It happened at around 4:20pm on Mono Way near the Timberhills Shopping Center. The Sonora PD reports that 34-year-old Roger Hughes of Tuolumne was riding a 2011 Harley Davidson eastbound on Mono Way. A 2013 Honda sedan, driven by 75-year-old Nancy Fagan of Jamestown, pulled out of the shopping center and across the eastbound lanes. Hughes motorcycle struck the car, and he was ejected. The PD reports that he suffered major head trauma and was airlifted to a hospital in Modesto.

The eastbound lanes of Mono Way were closed for approximately 45 minutes.