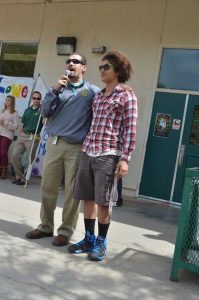 During the lunch hour, the Golden Regiment trumpeted, poems were recited, praise was given and students cheered on Sophomore Lowe, whom will not only represent the school, but the state on a national stage next week.  The big send-off hopes to propel Lowe to victory as he heads to Washington, DC on Sunday for the National Poetry Out Loud Competition.

As reported in March, Lowe competed against some 30,000 students to walk away with the state title.  Next week he will take on 53 other state champions at the National Level with 53 other state champions at the George Washington University on April 28, 2015.  The Poetry Out Loud semifinals will take place from 6:00 a.m. to 5:00 p.m. PST.  Nine finalists will advance to the National Finals the following day.  The competition will be webcast on the National Endowment for the Arts’ website here.

The Tuolumne County Arts Alliance puts on the local Poetry Out Loud competition allowing students to move on to the state contest and then the national event.