McClintock: Billions Of Gallons Being Released From Melones 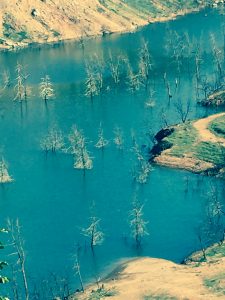 Congressman Tom McClintock expressed his concern yesterday on the US House Floor over the billions of gallons of water that is being released from New Melones Reservoir during the worst drought on record.

McClintock was Thursday’s KVML “Newsmaker of the Day”. Here are his words:

“California is now in its fourth year of the worst drought on record.  Hydrologists estimate it is the worst drought in 1,200 years.  The Sierra Snowpack today is just six percent of normal.  Many of our reservoirs are nearly empty.  One of our largest, the New Melones Reservoir on the Stanislaus River, is at just 22 percent of its capacity – with the rainy season now officially over.

Water rationing is now in effect in many communities.  Many Californians face $500 fines if they take too long in the shower or spill a gallon of water on their sidewalks.

And yet in the last several weeks, the Bureau of Reclamation has released about 10 BILLION gallons of what precious little water remains behind the New Melones Dam in order to nudge a handful of steelhead trout toward the ocean.

That’s enough water to meet the annual residential needs of a human population of 300,000.  How many fish are affected?

Biologists estimate that it will affect the offspring of about 29 steelhead trout in the Stanislaus River – a few hundred smolts almost all of which will be eaten by predators long before they reach the ocean.  And that assumes they won’t swim toward the ocean on their own – as they have been doing without our helpful assistance since time immemorial.

Put in financial terms, with water selling for $700 per acre foot, the cost of this ridiculous exercise is about $21million.  But the real cost will be felt in the fall if the rains don’t return.  At that point, these releases guarantee there will be no water left for human beings OR fish.

All this occurs AFTER a compromise without which Lake Tulloch, below New Melones, would have been drained below the water intake pipes that serve a population of nearly 10,000 human beings.

When are we going to wake up to the lunacy of these current environmental laws and the ideological zealots who are administering them?

Who in his right mind would dump enough water to meet the annual residential needs of a population of 300,000 human beings in order to nudge toward the ocean the offspring of maybe 29 steelhead trout – it could be as few as 6 – in the worst drought in 12 centuries?  Yet that is precisely the policy of this administration.

President Obama has authority under the existing Endangered Species Act to convene a process to suspend these laws during the drought.  Governor Brown also has the authority to request the president to act. Despite repeated calls to do so, neither has responded.

Nor is this waste limited to just one reservoir and one river.  The Bureau of Reclamation is ordering pulse flows throughout the state, completely uncaring of the impact on the rapidly endangered species called Homo sapiens.

Mr. Speaker, three weeks ago, I introduced HR 1668, the Save Our Water Act.  It simply provides that during an extreme drought, the requirements for massive environmental pulse flows are suspended.  I want to urge speedy consideration and passage of this act, but I fear it will not come in time to prevent the exhaustion of our remaining water supply.

I warned of this practice last year, and I appealed to state and federal water managers to suspend these water releases during the drought.  Sadly, I was unable to rally much public interest – I think in large part because few people actually believed that our water policy could possibly be so foolish.

They do now.  We are now reaching a crisis that can no longer be ignored, and Californians are now starting to realize that our environmental laws long ago passed from the realm of reason to the realm of ideological extremism.

Droughts are nature’s fault.  Water shortages are OUR fault.  We once built dams to store water from wet years so that we would have it in dry ones.  But the same radical environmental laws that are squandering our existing water supply have also obstructed the construction of any major new storage since 1979, while the population has nearly doubled.

Dr. Johnson once said that when a man is to be hanged in the morning, it concentrates his attention remarkably.  If any good comes out of this drought, it may be that the American people finally have focused on the damage these laws have done, and are ready to change them and the zealots responsible for them.”