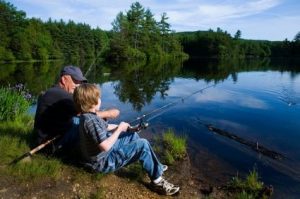 Sacramento, CA — A reported 55% reduction in fishing licenses has some Mother Lode lawmakers making a push to reverse that downward trend.

Senator Tom Berryhill and Assemblymember Frank Bigelow are the authors of the Sportfishing Stimulus Act of 2015 or SB 345, which they tout as a way to revitalize the state sportfishing industry by increasing tourism dollars and jobs while helping maintain revenue for habitat restoration and protection.

A California Sportfishing League study found that by 2027 the state may dip below 500K   in fishing license sales, which would be a 78% drop since 1980 when licenses cost just $5.  Senator Berryhill points to price and convenience as one reason for the decline.  “California has some of the best fishing holes in the nation but some of the highest prices and antiquated regulations.  It is no wonder we come in dead last nationally on the percentage of people actually fishing,” He adds, “Making licenses more affordable, practical and convenient is one step we can take right now to begin reversing that trend.”

SB 345 would replace the current calendar year fishing license with one that is good for twelve consecutive months.  A junior license would be offered at a reduced cost.  Assemblymember Bigelow touts, “Recreational fishing has a tremendous impact on our local economy and tax base, contributing billions of dollars to our tourism industry.  SB 345 will ensure that our communities can continue to provide premier tourism and recreation experiences for all Californians,” Assemblyman Bigelow said.

An earlier measure authored by Senator Berryhill with similar features failed to pass in 2013.