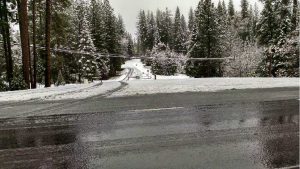 The winter-like weather is resulting in a mix of power outages and traffic hazards in the Mother Lode.

Update 8:15pm:  The CHP reports traffic is moving freely once again on Highway 49 in Calaveras County. A solo vehicle went off the northbound lane of the highway near Carson Hill at 6:14pm.  Multiple units responded to the scene including a rescue crew.  The vehicle went down a steep 400 foot embankment. Rescuers used ropes to get to the wreckage site and free the driver.  Luckily, the person suffered only minor injuries and was taken to Sonora Regional Hospital for treatment.  Officers directed traffic as equipment blocked the southbound lane for more than two hours. The CHP reports tow crews will retrieve the vehicle sometime tomorrow.

Update 7:50pm:  PG&E has restored power to 34 customers in Tuolumne County south of Jamestown along Twist Road. Crews remain on the scene of a damaged power pole in Columbia which has 48 customers without power. PG&E had hoped to have the pole fixed by 7:30pm, but has not provided an updated time of repair.

Update 7:30pm:  Emergency and rescue crews remain on the scene of a solo crash in Calaveras County. A vehicle went off the northbound side of Highway 49 near Carson Hill and down a steep 400 foot embankment. Rescue crews are using ropes to retrieve possible victims from the wreckage, according to the CHP, which says there is “no status on the driver of the vehicle.”  The southbound lane of the highway is blocked and may remain so for several hours tonight according to the CHP. Officers are directing traffic.

Update 7:05pm:  PG&E reports 34 customers are without power south of Jamestown near Twist Road. Crews are on the scene trying to determine what caused the outage and if it was weather related.

Update 6:45pm:  The CHP reports a rescue crew has been called to the scene to use ropes to help any victim in the wreckage. The southbound lane is blocked with equipment.  The CHP reports there is “no status on the driver of the vehicle” at this time.

Update 6:30pm:  A vehicle has gone off the roadway on Highway 49 in Calaveras County. The CHP reports the vehicle left the right side of the northbound lane and down a 400 foot embankment near Carson  Hill just north of the bridge.   There is no word on injuries, but an ambulance is responding to the scene.

Update 6:10pm: Emergency crews are heading to a two vehicle crash in Calaveras County. The CHP reports a Nissan and another vehicle hit head-on Highway 4 near Stallion Way. One vehicle has overturned and the highway is blocked.  An ambulance is heading to the scene, but there is no information on injuries at this time.

Update 5:05pm:  More than 70 Mother Lode residents remain without power this evening.  Most of their lights went out after 3pm. PG&E reports 48 customers in Columbia east of the college in the area of Gunsight Lane and Road remain without electricity.  The CHP has reported power lines down on Gunsight Road.  PG&E estimates the repair time at 7:30pm.

The CHP remains on the scene of a three vehicle accident on Highway 59  near Chinese Camp.  The roadway is blocked with officers directing traffic.  An ambulance is on the scene, but there is no word on injuries.

Update 4:48 pm: CHP reports a head-on accident on Highway 59 near Chinese Camp. Emergency personnel are heading to the scene to assess possible injuries with a person reported as pinned in their car. Traffic is stopped and backing up in the area.

Update 4:26 pm: PG&E reports power has been restored for many that were with out power. Crews are en route to several isolated locations with out power in both Tuolumne and Calaveras county. Columbia near the college there are still several with out power.

Update 4:10 pm:  There have been numerous weather related accidents reported in the Mother Lode this afternoon.  The CHP is warning of slick roads and warns motorists to slow down.  In Tuolumne County, Highway 108 from Twain Harte to Long Barn has cars spinning out. The CHP reports the roadway is nearly blocked with disabled vehicles at the higher elevation. Currently, emergency crews are on the scene of a solo vehicle crash on the highway near Confidence Road.  The CHP reports a Ford Explorer went off the roadway crashing into a ditch.  Luckily there have been no injuries in all of the crashes this afternoon.

Update 3:35pm: PG&E reports more than 3,100 customers are without power in Calaveras County. The area stretches from Copperopolis to La Grange Road just west of Lake Don Pedro.  The lights are also out for 48 customers in Columbia east of the college in the area of Gunsight Lane and Road.  The CHP has reported power lines on Gunsight Road. Crews are heading to both scenes. There are no details on what caused the outages or any estimated time of repair.

Update 3:05pm: The CHP reports a wreck on Parrots Ferry Road in the northbound lane near Moaning Cave Road. A vehicle has gone off the roadway on a bad curve according to the CHP, which advises there is debris on the roadway.  Luckily, in this crash, and the other five reported on this afternoon there have been no injuries. The CHP warns the roadways are slick and caution motorists to slowdown.

Update 2:45pm: PG&E is reporting a power outage in the Copperopolis area of Calaveras County. The lights are out for 27 customers on Stagecoach Road and Buckboard Drive, which is off Highway 4.  Crews are heading to the area, but PG&E has no details on what caused the outage and whether it is weather related.

Update 2:35pm:   The CHP is on the scene of three weather related accidents in Calaveras County.  One just happened on Highway 4 in the eastbound side west of Horseshoe Drive, which is south of Hathaway Pines. It involves a solo vehicle spinning out on the slick roads and hitting an embankment.  Motorist will want to use caution as there is debris in the roadway with officers directing traffic.  Emergency crews are also on the scene of a solo vehicle that spun out in to a field on O’Byrnes Ferry Road and Reeds Turnpike near the Sierra Conservation Center.  Emergency crews remain on the scene of a vehilce versus tree crash on Highway 4 on the eastbound side near Pool Station Road in Angels Camp. Luckily the CHP reports there are no injuries in any of these crashes., but motorists to slow down.

Update 2:05pm:  Emergency crews are heading to the scene of a vehicle versus tree crash in Calaveras County. The CHP reports the accident is on Highway 4 on the eastbound side near Pool Station Road in Angels Camp. An ambulance is responding to the scene, but there is no word on injuries at this time. The CHP says there is a lot sleet on the roadway making is slick and they caution motorists to slow down.

Update at 1:05pm:  Emergency crews are on the scene of a crash near Burson in Calaveras County. The CHP is reporting a Ford pickup has smashed into a telephone pole on Burson Road south of Highway 12.  An ambulance is responding to the scene, but there is no word on injuries at this time.

Updated at 12:15pm: The CHP reports that some vehicles are stuck on Highway 120 about a mile from entrance to Yosemite National Park. Power has been restored to the 2,900 PG&E customers in Copperopolis that lost electricity this morning. There are still a couple of homes without power near Twain Harte and Angels Camp.

11:15am: PG&E reports there is a power outage impacting over 2,900 customers in the Copperopolis area. There are also smaller outages impacting a handful of customers near the communities of Angels Camp, Vallecito, Sonora and Phoenix Lake. PG&E says it’s not immediately clear when the outages will be restored.

Snow is causing some traffic hazards this morning. The CHP reports that several vehicles are getting stuck on Twain Harte Drive due to the snow, so expect activity in the area.

On Highway 108, as of 11:15am, chains or snow tires are required starting at Twain Harte, on Highway 4 starting in Arnold, and on Highway 120 three miles west of the Yosemite National Park entrance. You can find the latest chain control information by clicking here.

The National Weather Service has issued a Winter Storm Warning for the Sierra Nevada through midnight.

A special thanks to community news partner Cindi Gerhart for sending in a photo. Pictures can be e-mailed to news@clarkebroadcasting.com.