Warm Weather Opens Road Early, But Not The Passes 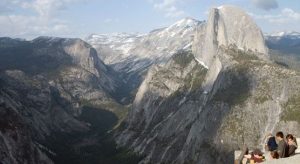 Visitors can travel the roadway beginning Saturday at 6 a.m. Park spokesperson Ashley Mayer explains, “The road is opening earlier than normal this year and that has to do with the less than normal snowpack we’ve received. In a typical year, the roadway would open in mid or end of May.” The Bridalveil Creek Campground will open within the next several weeks, according to Mayer, who adds, “There is no anticipated opening date for Highway 120 Tioga Pass.”

Highway 108 Sonora Pass and Highway 4 Ebbetts Pass also remain closed. Caltrans spokesperson Rick Estrada says, “Although there have been low volumes of snow this winter, Ebbetts Pass and Sonora Pass have conditions that still require their closure. They both have steep grades, they’re high elevations, and the narrow width of the road can’t handle snow removal equipment and vehicles at the same time, which prevents them from being opened.”

Estrada adds that, even if there is not a lot of snow, the crews use the time to work on equipment and travel the length of the passes, inspecting the roadway for damage, fallen rocks or trees. “One of our maintenance people, just last week, sent down a couple of photos of some trees they had moved off the roadway,” he shares. The goal each year and this year, according to Estrada, is to have the passes open in time for the Memorial Day Weekend.