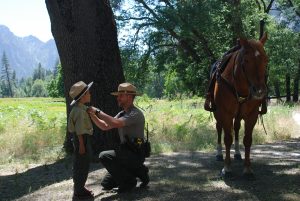 Yosemite, CA – A recognizable ranger has been selected to become the Honorary Chairman of Yosemite’s 125th anniversary celebration.

In 1890, legislation that created Yosemite National Park was signed by President Benjamin Harrison. Gabriel Lavan-Ying will be named the honorary chairman of the anniversary celebration at a special event to be held Tuesday at Yosemite Falls.

Lavan-Ying made headlines last summer when he became an honorary park ranger through the Make-A-Wish Foundation. He suffers from a terminal illness, and his big wish was to become a Yosemite Ranger. During his time in the park he helped put out a wildland fire and assisted an injured hiker. Lavan-Ying, of Gainesville, Florida will be making his first trip back to Yosemite since last June.

Over 300 students will also be on hand for tomorrow’s appointment, and it goes with a theme of “Youth of Today: Park Stewards Of Tomorrow.”

Tomorrow’s Event runs from 11am-1pm, and it’s open to the public.