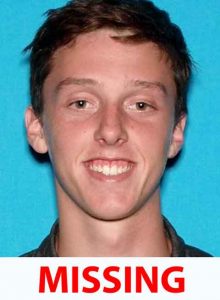 Yosemite, CA — Yosemite National Park officials have been looking for a man that went missing near Lower Yosemite Fall over the weekend.

He is identified as 20 year old Michael Dahl. He was last seen Saturday wearing a light blue hoody sweatshirt and carrying a camera. He is 6’1 with brown/reddish hair, and green eyes. A search remains underway. Anyone with information on his whereabouts should call 209-372-0259.