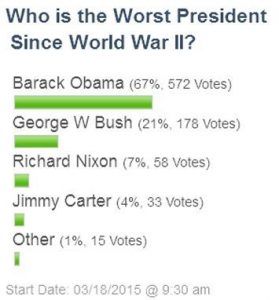 At the beginning of the week the questions was “Does “Honest” Describe Hillary Clinton?” The question is similar to an On The Street question which can be heard as a daily vignette on KVML 1450am, Star 92.7 and 96.7 KKBN.

Hillary Clinton is likely go for a second presidential run and is expected to officially announce her candidacy sometime in April. She has been in the news related to her involvement regarding criticism of how emails were handled. According to a CNN phone poll of just over 1,000 the email issue did not hurt her poll stats. She remains solidly on top, decimating all potential rivals – in both parties.

Support for Clinton’s candidacy has dropped about 15 percentage points since mid-February among Democrats, with as few as 45 percent saying they would support her in the last week, according to a Reuters/Ipsos tracking poll. Support from Democrats likely to vote in the party nominating contests has dropped only slightly less, to a low in the mid-50s over the same period.

Even Democrats who said they were not personally swayed one way or another by the email flap said that Clinton could fare worse because of it, if and when she launches her presidential campaign, a separate Reuters/Ipsos poll showed.