Breaking Ground On A Sister Lodge 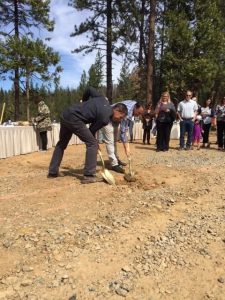 Yosemite, CA — With shovels in hand, developers of the new Rush Creek Lodge broke ground on the project today.

The Lodge will be built on Highway 120, a half-mile from the west entrance to Yosemite National Park, near Hardin Flat Road.  The two-story lodge will have 143 rooms, a restaurant, bar and hillside villas spread over 20 acres, along with other amenities such as a casting pond.  Lodge spokesperson Teri Marshall says, “The plan is to use local workers on the construction as much as possible, using local contractors…suppliers, and really going out of the area only if we’re not able to find it locally.”  Hired already, she says, are three local contractors. It’s expected to help provide economic help to the south Tuolumne County area.

The developers are First Light Hospitality, LLC, which operates the nearby Evergreen Lodge. As previously reported, last year developers asked Tuolumne County Supervisors for some changes to the zoning in order to avoid the Rim Fire burned area, which was approved.  Marshall explains, “The acreage where Rush Creek is located wasn’t that adversely affected by the Rim Fire.  The area itself is intact.  It’s not perfect.  It was touched by the Rim Fire, but it was not devastated by it.”

The total cost of the project is estimated to be $28 million.  The lodge is slated to open in spring of 2016. Click here for artists rendering of the new lodge.