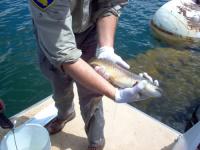 Sacramento, CA — Even with the lingering drought, a treat could await those who like to fish in Northern California as the state reports a possible plethora of salmon.

State wildlife officials say the latest forecast includes a strong return of more than 650,000 adult king salmon from the Sacramento River and

423,800 adults from the Klamath River fall run, which make up the vast majority of salmon taken in California’s ocean and inland fisheries.

“The forecasts are encouraging and suggest that California fisheries may see salmon seasons in 2015 that have increased opportunities over last year,” said Melodie Palmer-Zwahlen, a senior environmental scientist with the California Department of Fish and Wildlife.

This year’s forecast is higher than last year, according to State wildlife officials, who say Chinook salmon harvested in ocean fisheries in 2015 hatched 2-4 years ago, and subsequently have not been highly impacted by the drought.  It is next year that state and federal fishery scientists say future ocean salmon fishing opportunities may be impacted by the ongoing drought.