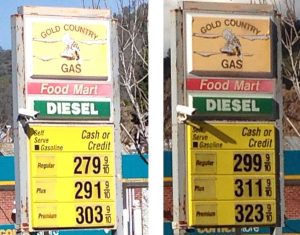 Sonora, CA – The picture to the left says it all.  The side-by-side pictures were taken today and Wednesday showing a 20 cent hike in the price in just two days at a local gas station.

One suspected reason for the soaring prices in California this week has been the explosion that halted gasoline production at the Exxon Mobil Corporation oil refinery in Torrance on February 18.  The price of gas across the state has surged to 25 cents per gallon since Monday.  Additionally, another Northern California oil refinery is also down.  Together the two produce 17% of the state’s gasoline.

In Sonora, the average price of gas is $2.99 a gallon.  Residents in Calaveras County are paying nearly 30 cents more with Angels Camp and San Andreas average pump prices at $3.29 a gallon.