A Month-plus Of Burning In Yosemite 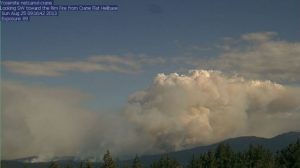 Yosemite, CA — Visitors may notice smoke in the skies over Yosemite National Park starting Thursday due to a  prescribe burn in the Wawona area near the South Entrance.

The total burn will be 533 acres.  Tomorrow, 60 acres will be ignited and the remaining 473 acres will go up in flames throughout the month, weather permitting, until Monday, March 30, 2015.

Yosemite spokesperson Ashley Mayer says there is a dual purpose for the burn.  She explains, “One of them is to protect the community from fire and so it’s to reduce the fuels and the excess vegetation that has grown.”  The other reason, according to Mayer, is to restart the ecosystem as some plants rely on fire to regenerate.

Additionally, Park officials say this burn will create a continuous fuel break between the community of Wawona and the South Entrance, linking multiple previous prescribed fire and thinning projects.

During burning, smoke may be visible along the Wawona Road and in the community of Wawona.  Park officials ask visitors to drive with caution near firefighters and fire equipment. Assisting in the burns will be fire crews from the National Park Service, CalFire and the U.S. Forest Service.