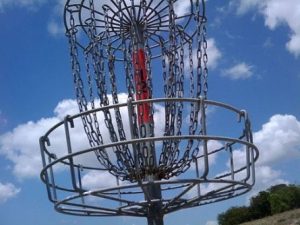 Sonora, CA — A popular disc golf course in the county will have to be removed.  The Tuolumne Utilities District Board of Directors voted 3-1 to engage legal counsel to get rid of the course on its Sierra Pines property in Twain Harte.

The Board debated the controversial issue at its Tuesday night meeting, with some members calling the disc golfers “trespassers” and others calling for more time.  Director Ron Kopf was the lone vote against removing the course questioning whether the group should be given more time to address the legal and insurance costs.  Spokesperson for the disc golf group Chris Graham told the board there was no need to pay for legal counsel, “just ask, and the disc basket s would be taken down.” In the end, Director Jim Grinnell called for the vote saying, “I think from a District stand point, the best thing that we could do right now, is to engage legal counsel.  If the other organization gets legal counsel and they’re able to work something out that’s satisfactory to protect the district that’s fine, but at this point I move to direct staff to engage legal counsel for the removal of the disc golf course.”

That has left the door open for a possible reprieve as after the vote the Board agreed to revisit the issue if the group is able to come up with a solution.  However, they will likely only have a month to do so as, according to General Manager Tom Scesa, a 30-day notice will go out to the group to take its baskets down.