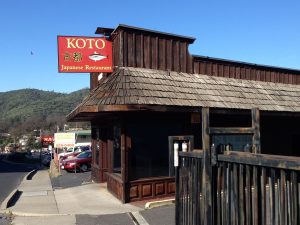 Sonora, CA — The Sonora Police Department reports that a man entered a downtown restaurant with a knife and demanded cash.

It happened earlier this week at the Koto House at 70 Stockton Road. A male wearing a ski mask reportedly entered through a side door, after hours, and approached the owner. The suspect was holding a knife that he had armed himself with while inside the restaurant. The suspect demanded cash, and took an undisclosed amount from the cash register. The suspect later put the knife down and fled through the side the door. The suspect is described at 5’6” to 5’8”, with an average build. The Police Department has reason to believe a second suspect may have also been inside the business at that same time, but the owner only saw one suspect. Anyone with information on the case is asked to contact the Sonora Police Department at 532-8141.