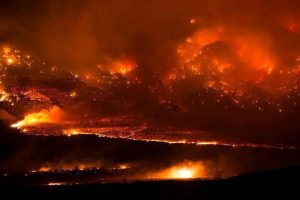 Mono County, CA — Containment is increasing on a major wildfire that’s been burning on the eastern edge of the Sierra Nevada.

Fire crews have increased containment of the wind-driven fire that destroyed 40 homes, but it’s unclear when residents evacuated from two small California towns (Paradise and Swall Meadows) will be able to return home. Around 250 residents were displaced, when the fire ignited on Friday afternoon on the west side of Highway 395, near the border of Inyo and Mono Counties. Firefighters made progress after rain moved in, and they have since contained 75 percent of the 7,000 acre fire. 500 firefighters are on scene, and four injuries have been reported. The fire has also taken out some power lines in its path.