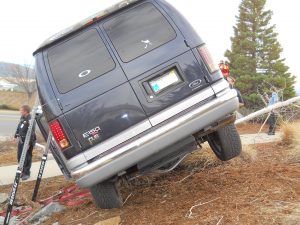 Sonora, CA — Emergency crews rescued two people from a van teetering on rock after it crashed on Greenley Road in Sonora.

The accident happened at 3:07 p.m. this afternoon outside Sonora Regional Medical Center (SRMC).  When Sonora Police officers arrived on the scene at Greenley and Delnero roads, they found a Ford van see-sawing on a large rock between the two roadways.  Fire crews were called to the scene to stabilize the van and rescue the driver, 44-year-old Erik Estrada, of Twain Harte, who is quadriplegic, and the only other vehicle occupant, his 70-year-old mother.

Estrada told officers he was pulling out of the Bob’s Greenley Pharmacy parking lot when his vehicle abruptly accelerated.  The van then jumped the south sidewalk of Delnero Road and knocked over a small tree, ending up on a large rock.  It took tow crews several hours to remove the van.

Estrada was taken to SRMC suffering from a cut to his face and his mother was later taken to the hospital, complaining of back pain.