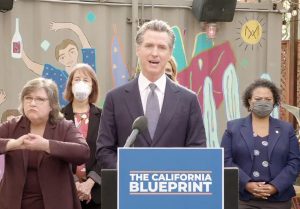 Sonora, CA — Governor Gavin Newsom says his administration will release a plan early next week focused on shifting from a Covid-19 pandemic stage to an “endemic.”

What it will entail is still unclear. At a press conference this morning Newsom was asked about when school children will no longer be required to wear masks indoors, and he responded, “(As part of the endemic plan) we’ll be putting out additional information as well about what is next for masking in our public schools.  We’ve been working for weeks with our education partners, there are 1,050 school districts in California, over 10,500 schools, and everyone has strong opinions. We are getting closer and closer to making public an announcement on mask-wearing in our public schools, and no one looks forward to that more than I do.”

He hinted that it would allow more “flexibility” and “local control.”

He did note, though, that he is concerned that the vaccination rate for kids between the ages of 5-11 is only 27.5-percent and said he would like to see that number increase.

Newsom declined to state any additional specifics but stressed multiple times that more will be publicly known early next week, likely on Monday.

Newsom’s administration has received questions in recent days about why the state’s masking requirement for most indoor settings will be lifted after February 15 but there have been no changes announced yet for schools.