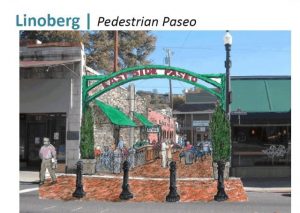 These include the conceptual plan for the Stockton Street-West Gateway Corridor project (graphics: stockton gateway project), the closure of Linoberg Street between Stewart and Green streets to create a pedestrian walkway/sitting area, and the architectural design of public restrooms on Stewart Street, along with allowing for bids for the latter project.  City Community Development Director Rachelle Kellogg says there is no funding yet for the Stockton and Linoberg Streets projects, but city council approval would continue to move both forward to eventually solicit money.

However, partial funding is already available for the restrooms.  Kellogg says, “Just for the architectural services, not to construct it.  What this will do is we’ll have an estimate of costs, so then we know how much money we need once the design is approved.”

Kellogg adds that the restrooms and Linoberg closure were designated as priority projects by the public.  The plan has garnered some criticism over the loss of parking spaces along Washington Street, which could be 30-plus spots, but Kellogg says, “Each project will be evaluated as to how it will affect parking.  Some projects will increase parking and some will take away…In the end, it [the plan] will increase parking in the area.” The plan does include two possible parking ramps, which would provide even more parking spots.

The city council could hear the recommendation as soon as next month.  The Vision Sonora committee meets at City Hall the fourth Thursday of every month, beginning at 9 a.m., and encourages the public to attend.