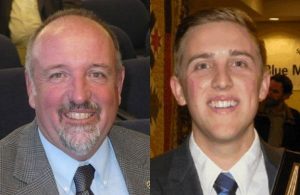 The Planning Commission has seven members, one for each Supervisorial District, and two at-large seats. In District One, Supervisor Sherri Brennan nominated Cole Przybyla-Williams, owner of Cole Video in downtown Sonora, and he was unanimously approved. Three other candidates submitted applications for District One, including William G. Baum Jr., Nancy L. Antonini and Robert Peterson.

In District Two, there was only one candidate that applied, tour operator John DeGrazio. Supervisor Randy Hanvelt pointed out that it is not a requirement that the Planning Commissioner live in the particular district they represent, and chose instead to nominate former Tuolumne County Public Works Director Peter Rei. Hanvelt pointed out that Rei, who lives in District Four, could practically throw a rock from his home, and have it land in District Two. Rei’s nomination was also approved unanimously by the Supervisors.

The District One Seat was previously held by Jim Garaventa, who resigned when he won a Sonora City Council seat. The District Two seat had been vacated by Ron Ringen, who had to resign after being elected to the T.U.D. Board.

The Supervisors will soon have another seat on the Commission to fill, as this morning they accepted the resignation of Jerry Morrow, who holds one of the at-large seats. Morrow was given a Certificate of Recognition for his service.

Planning Commissioners receive a $50 stipend per meeting, and they are typically held twice a month.