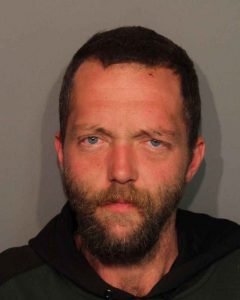 Angels Camp, CA — An Angels Camp man was arrested for drunk driving after fleeing the scene of a hit and run, which did not involve a person, but property.

The wreck happened on Saturday around 7:28 p.m. in the 1600 block of South Main Street.  Angels Camp Police report that when officers arrived on scene they found a heavily damaged Chevrolet pick-up that had smashed into a fence, some cement pillars and a tree; and the driver was nowhere to be found.

Investigators say evidence at the scene indicated that the driver lost control of the truck on a curve, heading into oncoming traffic.  He then reportedly over-corrected, went off the roadway and crashed.  After a search of the area, police say that a K-9 unit found 30-year-old Timothy Mark Nolan Jr. screaming in a field about a block away.

Nolan Jr. was arrested and booked into the Calaveras County Jail on charges of DUI, hit and run, and resisting arrest.