Remembering MLK’s Dream For All 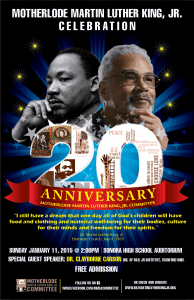 Sonora, CA – This Sunday, as the Mother Lode holds its annual free public celebration of Dr. Martin Luther King Jr.’s life, local organizers, will commemorate their twentieth year of doing so by kicking things up a notch with help from King’s own archivist and a gospel choir.

Beginning at 2 p.m. on Sunday, Jan. 11 at the Sonora High School Auditorium (N. Washington St. and Shaws Flat Road), the Motherlode Martin Luther King, Jr. Committee in Sonora will remember the importance of Dr. King’s work and its foundations that continue to carry forward in society. The annual event, which began as a simple gathering in January of 1996 has grown to a program where now more than 400 attendees enjoy noted speakers, music and student essays along with a post-event reception.

Usually held the Sunday before the Martin Luther King Jr. holiday, which this year, falls on Monday, Jan. 19, this year’s event was moved up a week to accommodate a special, internationally known guest, says Pat Cervelli, the committee’s board of directors chair.

“The speaker is Dr. Clayborne Carson and he’s been a professor of history at Stanford [University] for 30-plus years,” Cervelli explains. “In about ’84, he was selected by Coretta Scott King to manage the archives of Martin Luther King, so, the archives are now housed at Stanford…he’s the archivist…publishing books…editing and compiling King’s papers, and published about three volumes, so far.”

In sharing about King’s life and work, Carson will focus on the hot button topic of income inequality, Cervelli says. King was in the process of organizing a campaign to reduce poverty, for all races, around the time he was assassinated in 1968.

Along with musical entertainment by local artists Dennis Brown and Michelle Allison, event goers will be treated to a performance by an African American gospel choir from Merced.

Incorporated in 2007 as a nonprofit organization, the committee funds its annual expenses through fundraising, tax-deductible donations from the community and businesses such as Black Oak Casino, and grant monies from Sonora Area Foundation.