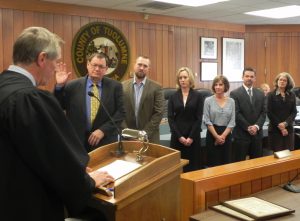 It was noted at the meeting that the oath was previously administered to Sheriff Jim Mele, who could not be in attendance today. Tuolumne County Clerk and Auditor-Controller Debi Bautista was also missing, due to a flight cancellation.

Immediately after the ceremony, the Board of Supervisors elected John Gray as the Chairman for 2015 and Karl Rodefer the Vice Chair.

Looking ahead, Supervisor Gray says the Law and Justice Center will be a big issue this next year. The County is finalizing plans for the juvenile detention facility, and still trying to acquire all the money needed to build the jail.

The Supervisors first regular meeting of 2015 will adjourn tomorrow.