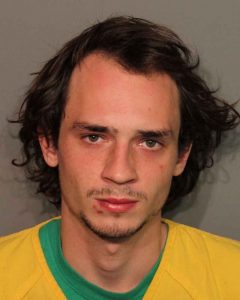 Angels Camp, CA – Multiple calls from a man who told police he would kill officers if they came near him, put Angles Camp police on high alert.

The incident happened on Monday at 7 p.m. The caller told police he was 22-year-old Logan Downey of Sonora.  Police say Downey told them he was in the back parking lot of the Angels Camp Save Mart supermarket with a 9mm Glock handgun and that he would shoot any officer that approached him.   When officers arrived on the scene Downey was gone.  Additional law enforcement was called in to search for Downey including Calaveras Sheriff’s Department and the California Highway Patrol.

Officers found Downey near the Angels Camp Police Department and arrested him. Investigators say he did not have a gun and he told them he never had a weapon. Officers searched the area and no gun was found.  Downey was booked in to the Calaveras County Jail for public intoxication, resisting arrest, and making threats to the police.