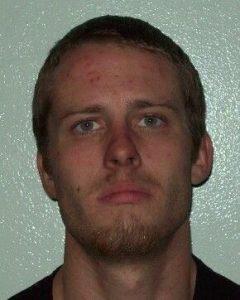 Angels Camp, CA – A Sonora man in a stolen SUV led police on a chase that started in Tuolumne County and ended in Calaveras County.

The CHP reports the incident began after a Ford Bronco was stolen from the Tractor Supply store in Sonora around 11 a.m. yesterday.  Then around 1 p.m. a person reported seeing the stolen Bronco traveling west on Highway 108 in Jamestown.  An officer caught up to the vehicle, which took off northbound on O’Byrnes Ferry Road.  From there, the Bronco headed eastbound on to Highway 4 towards Angels Camp.  The driver then turned southbound on to Highway 49 in Angels Camp.  The Bronco was finally stopped after it turned on to Raspberry Lane and entered the Veteran’s Hall parking lot, where the driver tried to ram through a fence.

The CHP says, the driver, 24-year-old Leslie Hay and a passenger jumped out of the vehicle and took off running.  The passenger was nabbed in the parking lot.  Detectives say a K-9 dog found Kay hiding behind some berry bushes nearby.  He was arrested and booked into the Tuolumne County Jail on multiple charges.   Hays had another brush with the law two years ago, as mymotherlode.com reported, he was arrested on charges of stealing a pick-up truck in Sonora.

Several law enforcement agencies were involved in the chase, including the Calaveras Sheriff’s Department, the Angels Camp Police Department and the San Andreas CHP unit.