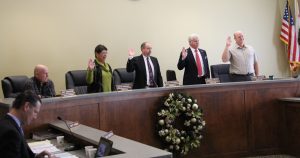 San Andreas, CA – The new Calaveras County Water District (CCWD) Board held its first meeting yesterday that included three newly elected members.  After being sworn into office, the Board got right down to work.

CCWD spokesperson Joel Metzger says board members will likely be appointed to committees at next month’s board meeting.

The other board members are: